Yeowling in the night? Cat been in a fight?

Hissing and spitting, howling and yeowling, scratching and scrambling in the backyard… The sounds you hear, may be the only clues you have that your cat’s been in a fight.

Sometimes there may be a particular cat that prowls the neighbourhood striking terror into “lessor” felines and their owners…And for anyone that’s read the Lynley Dodd children’s books, the character “Scarface Claw” may be the image that springs to mind. But sometimes a cat fight starts simply because two average cats cross paths at unexpected times. Why? Cats have territories (areas that they regard as ‘their space’) and home ranges (areas that they routinely use or visit but don’t necessarily defend). They usually have a routine where they will use a certain area at a particular time of the day and then not venture back there until the same time the following day. This means that several cats’ home ranges may overlap and they all use the same area at different times without much social interaction. What may upset this happy routine is if a new cat enters the area or if there is some disruption to one of the cat’s routines leading to conflict when they come across another in their range. 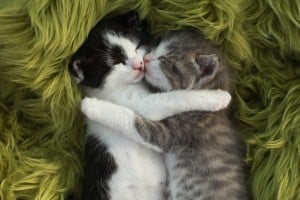 Less often, cats may get into fights with other animals – dogs, possums, bats, rats etc. The wounds inflicted during these interactions may be just as serious, if not more so.

What are the signs that a cat has been in a fight?

Those typical sounds described above should make you suspicious that your cat has been in a fight. But what if you didn’t hear anything, or you come home late and something just doesn’t seem quite right?

Very often cats will develop abscesses at the site of puncture wounds. These develop when a sharp canine tooth cuts through the skin and penetrates deep into the underlying tissue. As the attacker pulls back, the tooth pulls an area of skin loose making a pocket where bacteria are able to multiply rapidly. So although from the outside there’s only a small hole, there is actually a lot of damage underneath. With the bacteria growing and nowhere for the infection and debris to drain to, a pocket of puss begins to build up forming an abscess. Occasionally these abscesses will burst on their own which may result in an open wound that smells and looks horrible, does not heal very well or occasionally reforms if drainage is poor.

So what do you do if your cat has been in a fight?

Depending on your cat’s temperament and the severity of its wounds, sometimes the only thing you can do is wrap them in a towel and get them checked by a vet. However, if your cat will allow you or if it will take a while before it can be seen, here are a couple of pointers:

Your vet will examine your cat, evaluate the wounds and determine if there are any other areas/organs that need attention.

Can cat fights be prevented?

Desexing reduces cats’ tendencies to roam, so they are less likely to venture into other cats’ territories. Keeping them exclusively indoors or limiting their outdoor access and contact with other cats will reduce their chances of getting into fights. For cats that live in the same household, providing suitable environmental enrichment, food, water and litter trays goes a long way to helping reduce tension, but this topic also needs more in-depth discussion than will be covered in a future post.

Another good reason to consider some of these factors is that cats that get into fights are far more likely to contract Feline Immunodeficiency Virus (FiV). This virus is transmitted in the saliva in a bite. The effects can be similar to those seen in HiV in humans. It’s worth considering vaccinating your cat against FiV if they spend any time outdoors.

If you would like any further information or would like to book an appointment to get your kitty checked out, please call 0481 527 678 or email.

This is a courtesy notice to let you know that we’re fully booked until 24 January. Please use the online booking system to make an appointment where possible. For emergencies, please contact Pet Emergency on 3359 5333 (Stafford Heights) or 3384 2233 (North Lakes) or BVECCS (Albany Creek) on 3264 9400.

Wishing You a Happy New Year,